What Percentage of Americans Are Evangelical?

During this election cycle a great deal of attention has been given to the evangelical vote. And for good reason: evangelicals are believed to make up 20% of the voting electorate. However, counting the number of evangelicals has always been a challenging task.

Some evangelicals attend mainline denominational churches, and not everyone attending evangelical churches hold to what are typically considered evangelical distinctives. And to make things even more complicated, some who hold to evangelical beliefs do not self-identify as evangelicals. Leith Anderson and Ed Stetzer, working with a group of evangelical leaders, came up with four belief statements that appear to identify evangelicals when used in a questionnaire. They report their findings in the latest issue of Christianity Today (April, 2016) in “A New Way to Define Evangelicals” (pp. 52-55; the online version can be found here).

The four belief statements are:

“The Bible is the highest authority for what I believe.”

“It is very important for me personally to encourage non-Christians to trust Jesus Christ as their Savior.”

“Jesus Christ’s death on the cross is the only sacrifice that could remove the penalty of my sin.”

“Only those who trust in Jesus Christ alone as their Savior receive God’s free gift of eternal life.”

Thumbs Up for “Risen”–Way, Way Up

In 2003, Fiennes portrayed Martin Luther in Luther, and he will play Eric Liddell in The Last Race, which is scheduled for release later in 2016. The Last Race is a sequel of sorts to Chariots of Fire, and tells the story of Liddell’s missionary service in China and his eventual martyrdom.

In Risen, Fiennes plays the part of Clavius, a military tribune who serves in the Roman army in Judea during the days of Pontius Pilate. Pilate has charged him with the task of finding the body of Jesus of Nazareth, which has disappeared three days after his crucifixion. Fiennes portrays the hardbitten soldier with understated determination, which makes his performance very effective.

Hollywood finally realizes that the market for faith-based films is a lucrative vein to be mined. A least half of the previews shown before Risen have explicitly Christian themes. Generally the choices have been either theologically aberrant or even abhorrent (The Last Temptation of Christ, or The DaVinci Code as examples) or simply cheesy (God’s Not Dead comes to mind). With Risen, Hollywood gets it right. The sets, the acting, the production values are all top-notch. The story is original and entertaining. Most importantly, Risen faithfully tells the gospel message. This is a great Easter movie. Thumbs up for Risen–way, way up.

Tonight (Feb 22, 2016), at 7 pm, Greg Thornbury will present the Carver-Barnes lecture. His topic is entitled “Cain, Abel, and Kanye.” The annual Carver-Barnes lecture is sponsored by the L. Russ Bush Center for Faith and Culture. In order to accommodate the crowd the venue has been moved from the Bush Center to the sanctuary of Wake Forest Baptist Church, which is located on the campus of Southeastern Seminary. 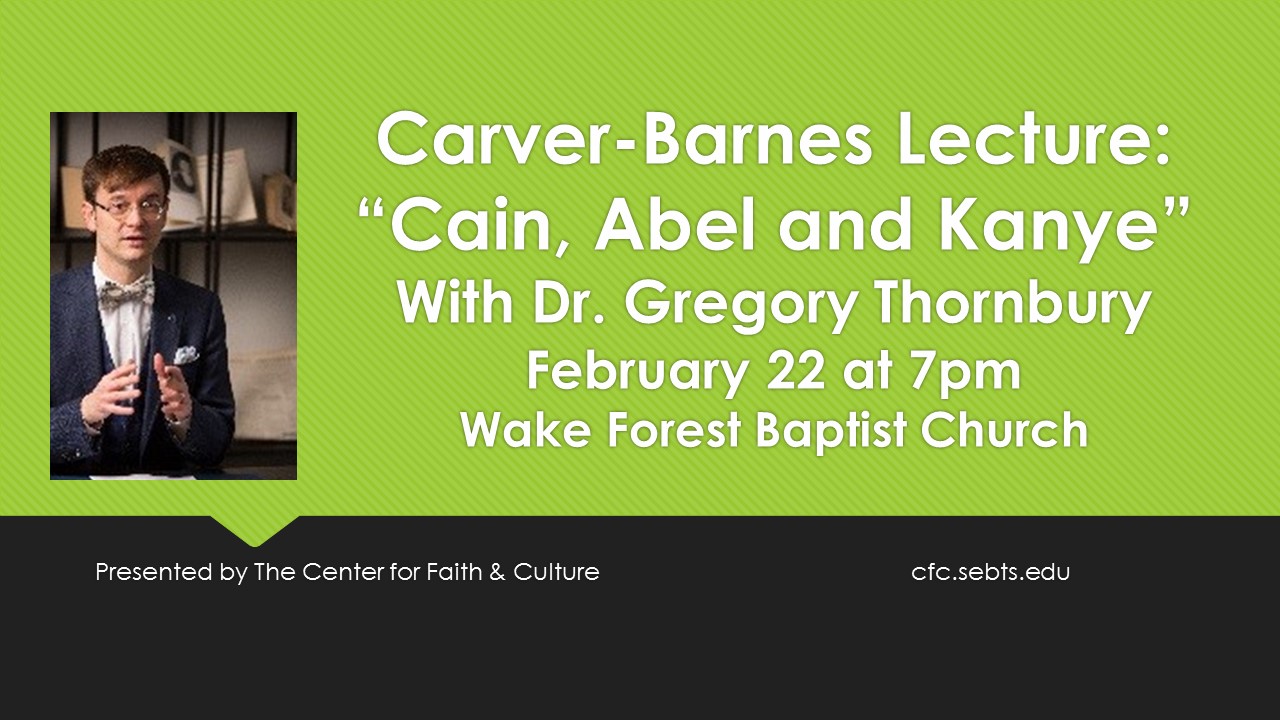 Dr. Thornbury serves as the President of The King’s College in New York City. Called “America’s First Hipster College President” by The American Spectator, Dr. Thornbury is also a Visiting Professor at the Values and Capitalism Initiative of the American Enterprise Institute; a Senior Fellow for The Kairos Journal; a columnist for Townhall.com; and a member of the editorial board of the Salem Media Group. You’ll want to hear him tonight. Registration is free and can be done here.