Every summer, one of the highlights for many folks attending the SBC Annual Meeting is the Pastor’s Conference. This year, one of the preachers was our friend and fellow Between the Times contributor Ed Stetzer. As most of our regular readers know, Ed is the president of LifeWay Research, a visiting professor at Southeastern, and a prolific author and blogger. What you may not know is that Ed can flat preach. And when it comes to the declining membership statistics and baptisms among Southern Baptist churches, Ed has a fire in his belly. Ed loves the church, he loves lost people, and he loves to see lost people come to faith in Christ and become part of the church. His sermon was a timely message that was very well received by those in attendance at the Pastor’s Conference. We would highly recommend that you take the time to watch the video below.

By the way, if you’re interested in hearing more of Ed’s thoughts on the SBC, be sure to check back in regularly over the next three weeks. Ed will be publishing an eight-part series on the Houston Convention and the future of the SBC. You won’t want to miss it.

Some Thoughts on Altar Calls

In recent years, the subject of altar calls has been sometimes hotly debated among Southern Baptists. If you don’t know the term, altar calls are a form of public invitation wherein attendees are urged to walk to the front of a worship center or other gathering place to discuss spiritual matters, normally near the conclusion of a worship service. Evangelists such as Billy Graham give altar calls at the conclusion of their evangelistic meetings. In many churches, pastors invite attendees to the front to seek counsel related to conversion, to express a desire to be baptized and/or join the church, and to discuss any number of other spiritual matters. Many churches also invite folks to pray at the front of the worship center, even if they do not discuss these prayers with a pastor or other spiritual counselor.

Altar calls have been common among American evangelicals for about two hundred years. During the Second Great Awakening, frontier Methodists first used this practice in their camp meetings. Some Baptists in the South also adopted the practice, which they almost certainly learned from the Methodists, since these two groups frequently cooperated in camp meetings in the Carolinas and Georgia through the 1810s. In the 1820s and 1830s, Charles Finney popularized the view among Presbyterians, Congregationalists, and Baptists in the urban Northeast. Though he was accused of introducing “Methodist” practices among these more Calvinistic churches, altar calls (along with his other “new measures”) became popular among many evangelicals.

Though it is impossible to determine with certainty when altar calls became a part of the weekly liturgy of most Southern Baptist churches, the practice was common after the Civil War and nearly uniform by the early twentieth century. This more or less coincides with the same period that Southern Baptists almost universally embraced “protracted meetings” (revival meetings) as a means to evangelize their communities. Though I can’t prove it, I suspect the two trends are related, since both reflect practices that emerged during the Second Great Awakening.

Back to the present. In my opinion, the debate about altar calls is “much ado about nothing.” I put altar calls in the category of what Augustine calls adiaphora: the “indifferent matters” that various Christians might disagree about without breaking fellowship. Simply put, altar calls are a particular strategy, born out of a particular context, that may or may not work in other contexts. Though open to various abuses (what strategy isn’t?), I don’t believe altar calls are inherently anti-biblical or manipulative. Though helpful in some contexts, altar calls aren’t biblically mandated means of encouraging spiritual decisions. As a mostly itinerant preacher, when I preach, I adapt my practice to the tradition of the church or other context in which I’m preaching. I would estimate that I extend an altar call about 75% of the time.

In taking this approach, I’m deliberately pushing back against two tendencies that I think are extremes and that frequently shoot at each other in this particular debate. On the one hand, I reject the argument that altar calls are (almost) always inappropriate. Some folks who make this argument are Calvinists who believe the practice is out-of-bounds because of its roots in the more Arminian wing of the Second Great Awakening. Other Calvinists reject altar calls because of their particular understanding of the regulative principle of worship; since altar calls aren’t in the Bible, we shouldn’t employ them today. Still others, from a variety of soteriological perspectives, reject altar calls for methodological reasons. Altar calls are seen to be relics of a bygone era of revivalism and cultural Christianity that simply do not work in a more postmodern, urban, post-Christian world.

On the other hand, I reject the view that altar calls are (almost) always necessary for one to be an evangelistic preacher or church. Some folks who make this argument are vocal non-Calvinists who are reacting negatively to the theological critiques that some Calvinists have advanced concerning altar calls. Others are simply pastors and other leaders who have found that altar calls useful in their contexts and seem to have a hard time understanding that the strategy might not work in other contexts. I suspect that still others defend altar calls for experiential reasons; they have expressed their own significant spiritual decisions in part by responding to altar calls.

I suspect that much of the debate isn’t about altar calls per se, but rather is about concerns each extreme has about the other extreme. Therefore, I want to offer some constructive advice to those who are strongly for or strongly against altar calls.

If you are strongly in favor of altar calls, be sure that you don’t require altar calls for individuals to seek spiritual counsel. To say it a different way, make sure that altar calls are but one avenue through which an individual can seek counsel, make spiritual decisions known, etc. Second, when it comes to conversion in particular, make sure that the altar call doesn’t replace baptism as the public profession of faith. This elevates the altar call, which is simply a human strategy, and downplays baptism, which is an ordinance commanded by our Lord. Finally, don’t turn altar calls into a sacrament by implying that one is saved through walking an aisle. I know that no pastor really teaches this, but I also know that many folks seem to hear this. (I did throughout my teenage years.) Pastors need to be extra careful to be as clear as possible that an altar call doesn’t convey any sort of grace, but is simply a way to encourage folks to share what the Lord has already done in their lives or to seek spiritual counsel from pastors or other leaders.

If you are strongly against altar calls, be sure that you are being intentionally evangelistic in your corporate worship gatherings. Press the claims of Christ upon sinners and plead with them to repent and believe—in that very moment. Provide them with avenues to make spiritual decisions known or to seek spiritual counsel. In my church, where we don’t regularly extend altar calls, we always remind folks that elders are standing at each door and are eager to talk and pray with anyone who desires to do so. Much of what happens in other churches during an altar call happens in our church after the service as individuals talk to a pastor about spiritual matters. Second, don’t assume that just because altar calls were popularized by folks with theological convictions that Southern Baptists reject (Methodists; Finney) means that altar calls are, by definition, theologically suspect. There are good and bad forms of altar calls; give your brothers the benefit of the doubt on this unless you have clear evidence that someone is being manipulative.

There is much in the Southern Baptist Convention that is worthy of debate and discussion, provided we are Christ-like and extend brotherly love towards one another. But I don’t think this issue is worthy of too much debate (discussion, perhaps). Let’s extend each other Christian charity in methodological strategies that don’t conflict with biblical teachings, since churches are free to adopt these strategies or dispense with them. This includes the altar call. For readers who want to consider appropriate ways to extend an altar call, check out Danny Akin’s chapter “Giving an Invitation: Soul Winning from the Pulpit” in Engaging Exposition (B&H Academic, 2011).

What Does it Mean to be a World Christian? 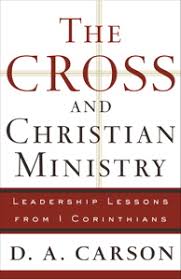 I don’t read very many books more than once. One book that I’ve read several times in the past few years is Don Carson’s The Cross and Christian Ministry: Leadership Lessons from 1 Corinthians, 2nd ed. (Baker, 2004). I recently had cause to read Carson’s fine book once again, this time with a Southeastern student and fellow First Baptist Durham member whom I’m discipling. The final chapter, an exposition of 1 Corinthians 9:19–27, is titled “The Cross and the World Christian.” In that chapter, Carson provides an excellent short summary of what it means to be world Christians:

Their allegiance to Jesus Christ and his kingdom is self-consciously set above all national, cultural, linguistic, and racial allegiances.
Their commitment to the church, Jesus’ messianic community, is to the church everywhere, wherever the church is truly manifest, and not only to its manifestation on home turf.
They see themselves first and foremost as citizens of the heavenly kingdom and therefore consider all other citizenship a secondary matter.
As a result, they are single-minded and sacrificial when it comes to the paramount mandate to evangelize and make disciples (p. 117).

I appreciate Carson’s summary, which very much resonates with what I hope to communicate in my teaching and preaching ministry (however imperfectly). It also fits nicely with our ethos at Southeastern Seminary, where our mission statement is “Southeastern Baptist Theological Seminary seeks to glorify the Lord Jesus Christ by equipping students to serve the Church and fulfill the Great Commission.” We want to be a “world seminary” equipping “world Christians” to make disciples of all peoples.

I think the only point I would add to Carson’s thoughts, and it’s a complementary one that I’m quite certain he’d affirm, is that being a world Christian begins by being covenantally united with a particular congregation, which is a local outpost of the one universal church that includes all Christians everywhere. Healthy local churches should be “world churches” that embody on a corporate level the priorities that Carson outlined above. It is through the local church that we learn to become and ultimately embrace all that it means to be a world Christian who lives, loves, and serves for the sake of the world that God so loves.online mobile game