Should We Pray for ISIS to Be Converted or Defeated?

“We sometimes forget that we are called to be a people of both justice and justification, and that these two are not contradictory.” 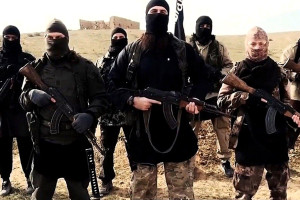 Like many other American Christians, at times I feel conflicted. ISIS is a malignant, evil organization, yet it is made of men (and some women) for whom Christ died. I pray for their defeat in the battlefield; I also pray for their salvation.

Moore reminds us that, however conflicted we may feel, these two prayers are not, in fact, at odds with each other. The Cross demonstrates that justification and justice are not contradictory. The problem, he explains, is that we often have a very therapeutic notion about forgiveness–one that absolves the wrong “as though it were all a misunderstanding.” Moore continues:

“The gospel does not say, ‘Don’t worry about it; it’s okay.’ The gospel points us to the cross where sin is absorbed in a substitute. God’s righteous condemnation of sin is there. He does not, and cannot, enable wickedness. And God’s mercy is there in that he is the One who sends his Son as the propitiation for sin. He is both “just and the justifier of the One who has faith in Jesus” (Rom. 3:26). The gospel doesn’t leave sin unpunished. Every sin is punished, either a the Place of the Skull, in Christ, or in the judgment of hell, on one’s own.”

So should we pray for ISIS to be converted or be defeated? The answer is “c”, all of the above.

1) At Christianity Today, this young Iraqi girl — living in a mall in Mosul because her family would likely be killed by ISIS if they went outside — teaches the Arab world and us about forgiveness.

2) Anthony Bradley argues at World Magazine that talk of Jesus and social justice among evangelicals often ignores the largest group in the U.S., poor whites.

3) From First Things, Matthew Schmitz points out the ironically traditional view of the family held by gay fashion designers Dolce and Gabbana.

5) For helpful stuff on faith and culture, check out the new Intersect Project hosted by SEBTS in partnership with the Kern Family Foundation.

The Faith of the Coptic Christians

Recently, Scott Hildreth, Director of the Center for Great Commission Studies, wrote about the faith of the 21 Coptic (Egyptian) Christians killed by ISIS. Here is an excerpt from his post:

The 21 men who were killed on the beach in Libya were killed BECAUSE of their professed faith. The sadistic evil doers made this profession on their behalf before the murders. Their captors confessed that these men were “people of the cross.” In this testimony I hear the echoes of Daniel’s enemies who said they could not find any fault in him unless it was his faith. These men were killed because their captors believed they were Christians.

I can assume (and yes, it is only an assumption) that these Islamic extremists would have pressed for, and been content with, these men converting to Islam. Based on my knowledge of these types of situation, I imagine these men were provided opportunities to renounce their faith and embrace the faith of their captors. Clearly they did not. They were murdered because they were men “of the cross.” On the basis of this testimony through the lips of their captors, and their lifestyle “not loving their lives even unto death,” Southern Baptists (and the rest of the Christian world) are right to hallow these men as martyrs and identify with them as brothers in the faith.

Our show of solidarity is not a declaration that the entire Coptic community is Christian. Rather, it accepts the testimony of these 21 men as valid based on profession and demonstration. We accept the testimony of a Baptist and would mourn their martyrdom even if we had not known them personally, though we all know that many who carry the label Baptist are not regenerate. In the same way, it is good and right that we identify with our brothers “of the cross” whose lives were taken because of this testimony.

Our solidarity with them does not make an entire people group Christians, and was never intended to do so. But based on what we have seen from a clear witness in front of a watching world, that same solidarity should also not be interpreted as cowardly or in any way abandoning the faith.

May these men receive the reward of their faith and may the Lord judge their murders with justice and most of all, may he grant to us all the faith to face whatever opposition we will with the same faithfulness they demonstrated on that Libyan beach.